Hearing a child’s disclosure of sexual abuse is hard. Responding in a way that promotes healing is even more difficult.

Your very first response should be to believe the child. Remember, very few reported incidents of child sexual abuse are false. The child has taken a huge risk in telling you and has likely held on to the pain of their abuse for quite a while. Honor their voices by being attentive, compassionate and taking action.

Why don’t they tell?

Before getting into the specifics of how to handle a disclosure, it is important to understand how rare a disclosure is. It is estimated that only 7% of child sexual abuse cases are reported. That means that for every case that is reported, 13 more go unreported. Below is a list of reasons why a child might not tell:

In addition to being aware to the barriers to disclosure, it is important to understand that recognizing a child’s disclosure might require “hearing between the lines”. Children will often speak of the abuse in an indirect manner such as:

5 R’s of handling a disclosure

Remain calm. Panic only causes the child’s fear and anxiety to increase

Respect the child. Find a private place to talk

Refrain from conducting your own investigation. Too many questions can ruin the integrity of the case. Defense attorneys can argue “coaching” in these instances.

Refuse to discuss this with others. Go to the appropriate agencies and professionals.

Report the disclosure to the appropriate agency. Law enforcement and Human Services can direct your call. 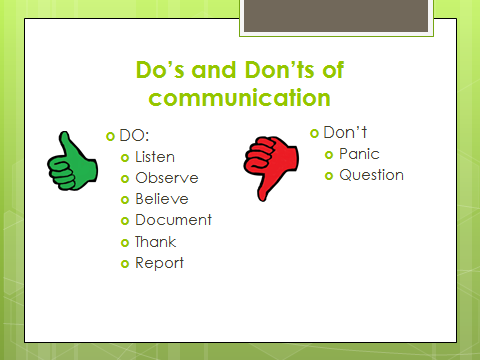 Once the initial shock of a disclosure is over comes the inevitable question “Now What?” After you have taken steps to report the abuse and protect the child, it is time for you to process your own trauma related to the disclosure and prepare for the road ahead. The National Traumatic Stress Network has created several information sheets that can help you (especially parents) move through the next steps.

Coping with a disclosure

What to expect from the legal system